We stayed at The Great Kills Yacht Club for six nights. On Sunday, Monday, and Tuesday we travelled into the City. On Sunday we had dinner with our son Jack, daughter-in-law Sara, and her family at a nice steak restaurant called The Palm. Not cheap but we had a terrific meal and time with all. On Monday, we met Jack and Sara at the tram station that goes to Roosevelt Island. Beforehand, we had lunch at Serendipity 3 near the tram station. They have terrific ice cream sundaes and milk shakes that they call frozen chocolate milk. The tram travels right alongside the Queensboro Bridge which is often seen in movies. Then we hopped on a ferry and went down the East River and got off at Wall St. to catch the bus back to Staten Island. On Tuesday, we had a most pleasant brunch at Sara’s folk’s apartment in Manhattan. 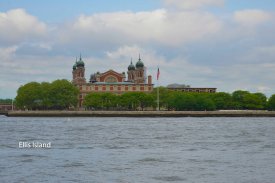 On Wednesday, we left Staten Island bound for a marina in Haverstraw, New York on the Hudson River above the Tappan Zee Bridge. We boated close to the Statue of Liberty and Ellis Island and then up along Manhattan. The current was running fast out to sea so we were able to make only 5 MPH while our normal Cruising speed is 9 MPH. It made for a very long day and spoiled our plans to meet Jack, Sara, and the folks for dinner at Patsy’s Pizza in East Harlem. Unfortunately, it was the one thing we really wanted to get done while visiting NYC. We have had many good pizzas in the Northeast including famous Wooster St. New Haven pizzas and Patsy’s is the one we like best. It’s one of the few remaining pizza venues that are allowed to use coal-fired ovens in NYC.